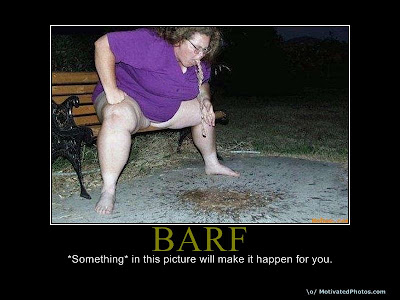 true random fact:
There is actually a specific area of the brain known as the bilateral vomitation center. It notes when our tummy is upset and queasy, and it makes the final decision whether to barf or not to barf.
randomly put together by sully86 at 5:00 PM No comments: Links to this post
Email ThisBlogThis!Share to TwitterShare to FacebookShare to Pinterest
Labels: random facts

Will be having a cool advertisement section. Here to start off, 14 time grand slam winner Roger Federer's Nike ad.
randomly put together by sully86 at 11:18 PM No comments: Links to this post
Email ThisBlogThis!Share to TwitterShare to FacebookShare to Pinterest
Labels: cool ad

the 2006 ,18th annual ugliest dog competition at the Sonoma-Marin fair in Pataluna, California 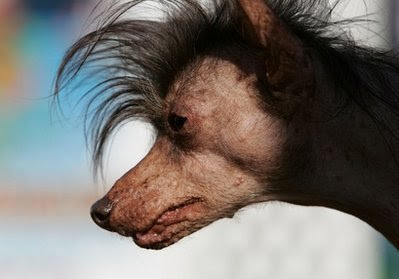 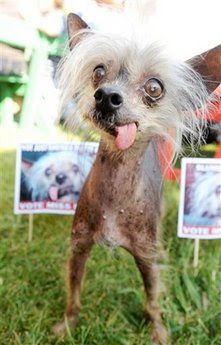 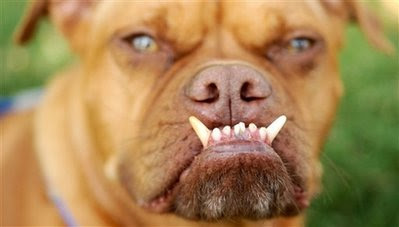 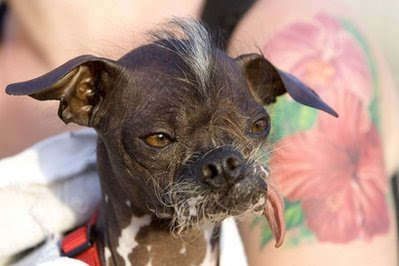 (David Paul Morris/Getty Images)
No prejudices, Just love
randomly put together by sully86 at 10:22 PM No comments: Links to this post
Email ThisBlogThis!Share to TwitterShare to FacebookShare to Pinterest
Labels: animals, random

so good you can even eat it on its own 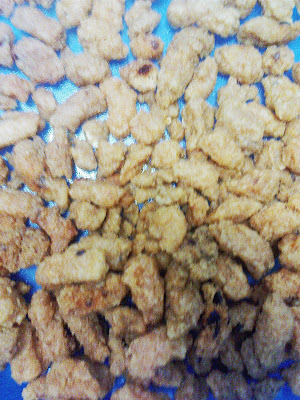 the best Indian snack ever, that is so good that you can't just have it only a handful. Now if only I know the name of this particular snack.
randomly put together by sully86 at 10:28 PM No comments: Links to this post
Email ThisBlogThis!Share to TwitterShare to FacebookShare to Pinterest
Labels: random

a tribute to the King of Pop 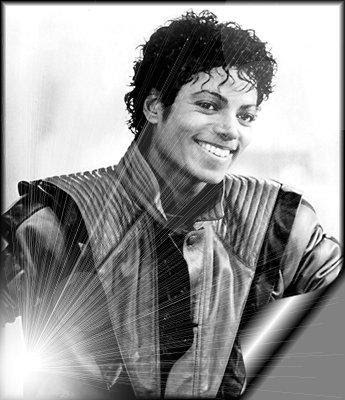 August, 29,1958- June,25,2009
His music unparallel
His talent unequal by the rest
His showmanship beyond words
You will always be remembered
randomly put together by sully86 at 11:51 AM No comments: Links to this post
Email ThisBlogThis!Share to TwitterShare to FacebookShare to Pinterest
Labels: dedication

signs of a transformer overload 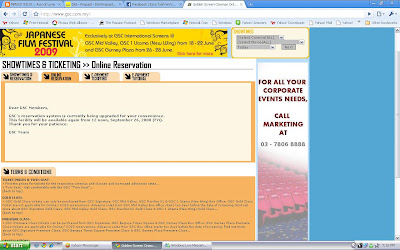 was trying to check back on my reservation seats when I was greeted what that.
randomly put together by sully86 at 7:34 PM No comments: Links to this post
Email ThisBlogThis!Share to TwitterShare to FacebookShare to Pinterest
Labels: funny, malaysia, movies

I love the world

Don't mess with the president

If he could kill a fly, imagine what would he do with the world. ARgghhhhhh!!!
randomly put together by sully86 at 11:16 PM No comments: Links to this post
Email ThisBlogThis!Share to TwitterShare to FacebookShare to Pinterest
Labels: youtube

So what is the best way to swat a fly? Here are 10 suggestions.

1. Do it early in the day, says Max Barclay, an insect expert at the Natural History Museum. "Because they are cold-blooded, the reactions of insects depend on the temperature of the air. Early in the morning or in the evening they will be a bit dopey, but in the heat of the day they will be very quick." But expect failure. Barack Obama was probably quite lucky, unless he's been practising. "Nine times out of 10, a human will come off second best. Flies have a phenomenal barrage of senses, half of which we don't have."

2. Approach from behind, goes one theory, because flies take off backwards. Anecdotal evidence suggests some people find this a successful method. But the fact that flies have 360-degree vision and can jump in any direction makes it improbable

3. Aim ahead, rather than at, the fly say researchers in the US, who found that within milliseconds of sensing a threat, flies get their body ready to take off forward, backwards or sideways. "Given that they are going to be jumping away from the swat, it's best to aim slightly ahead of it," says Michael Dickinson, of the California Institute of Technology. Although how far ahead depends on the speed of the fly. He's been studying take-offs for five years, using video that provides 5,400 frames a second of a fly's precise motion when threatened with a swatting.

4. The old-fashioned slap, now known as The Barack. Stay still, keep focused, take aim and attack. Ideal for a fast hand and if the fly is stationary. And if the world's media is in attendance, YouTube fame beckons.

5. Implements with holes are more effective, says Dr Peter Barnard, director of science at the Royal Entomological Society. "It's the air pressure they detect and fly away from. It's not so much that they see something coming, but they feel the pressure wave in front of the object." This is due to their coating of microscopic hairs, highly sensitive to air movement. Practising what he preaches, Dr Barnard uses a plastic pistol that fires a holed circular device. A fly swat gun, if you will.

6. Use chopsticks, like the Karate Kid. Under guidance from his instructor Mr Miyagi, teenager Daniel LaRusso demonstrates his speed and hand-eye coordination, and learns an important life lesson at the same time. Mr Miyagi's advice - "Man who catch fly with chopstick accomplish anything" - features on T-shirts in homage to the 1984 film.

7. Put hands either side of the fly, facing each other, so it doesn't know where the threat comes from, then clap the air a few inches above it. Wash hands immediately to remove the contents of the fly's stomach (don't ask).

8. Get a gadget. At the hi-tech end of the market there's an electric-powered mesh, a dome complete with pheromone and an insecticide aerosol. For those on a budget, there are decorative window stickers or pens to coat windows with transparent insecticide, and fly-swats cost as little as £2. Animal rights organisation PETA, which advocates compassion for flies, says there are humane bug-catching devices available too.

9. Improvise with a rolled-up newspaper (bear in mind point five, above), or a spray window-cleaner.

10. The humane approach - to capture but not kill. "I like to grab them in my hands," says Mr Barclay, who's had plenty of practice. "When you want them for a collection you don't want them damaged. Hit them with the palm of your hand and close your fingers over it." And if you're not an entomologist, release the fly outside. It will make you feel better.

randomly put together by sully86 at 8:38 PM No comments: Links to this post
Email ThisBlogThis!Share to TwitterShare to FacebookShare to Pinterest
Labels: article, random

Mr blog owner wants to do his normal routine on the internet goes to the internet and finds that he can't log in to yahoo mail. Mr blog owner wants to twitter, but finds out that he forgets the username and password. My blog owner wants to check his nuffnang account but he forgets his user name. After meddling into the yahoo mail account I manage to retrieve back my email account. * What a relieve* .After some thought put into in I manage to twitter my way after finding out that I can also use my email address without the username. Wait the minute, nuffnang uses email as well. *What a relieve*

All this happen after two weeks of holiday. Imagine if it was two month or two years or twenty years or something. Die man!!!
randomly put together by sully86 at 12:59 PM 2 comments: Links to this post
Email ThisBlogThis!Share to TwitterShare to FacebookShare to Pinterest
Labels: funny, random
Newer Posts Older Posts Home
Subscribe to: Posts (Atom)