Movie review:Harry Potter and the Deathly Hallows part one 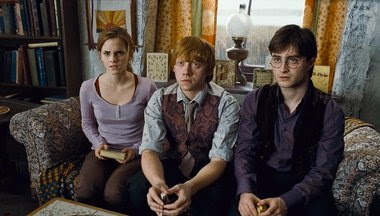 The seventh and final installment of the franchise comes as part 1 and this time around Harry, Hermione and Ron face perilous journeys together to destroy the hocruxes, parts of Lord Voldermort's soul.
A lot has been said about the stories of Harry Potter and I do believe that the quality of the movie and been improving from time to time. There was some that were butchered by the director, especially Prisoner of Azkaban. That was by far the worst movie ever. Why they split the movie into two? I suspect is for monetary and making this edition the most authentic Potter in the series.
My take, it is the most relax Potter film I have ever watched and the editing doesn't feel choppy and rushed and I think that what was on screen so far shows that the director is upping his commitment in staying true to the book. That I have to give two thumbs up for him.
So nice to see acting capabilities of the main actors, Daniel, Rupert and Emma. They have grown so much and gone are the days of forceful looking acting from these three.
Still can't say it is the best because this film is where all the foundations are laid for us to be prepared for the real finale next year. So that is about it.
Can wait for the finale next year.
other review
randomly put together by sully86 at 9:44 PM
Email ThisBlogThis!Share to TwitterShare to FacebookShare to Pinterest
Labels: movie, movie review