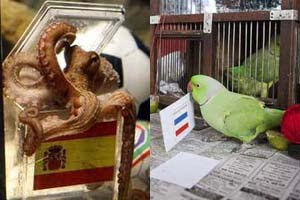 Paul the oracle has won the battle of predicting the winner of the world cup. Congratulations!!. Spain won the World Cup with a 1-0 victory over the Netherlands. While we celebrate all things World Cup, lets look back at what happened during the duration of the whole tournament.

the top  moment of FIFA world cup 2010 in no particular  order:
6
the most awesome fail goal keeping that I have seen so far
5
the waka waka controversy
4
Awesome refereeing during the World Cup. Kudos mate!!!
3
The horrifying truth and controversy surrounding the vuvuzelas during the World Cup
Link:
The history and origin of the vuvuzelas(wikipedia.org)
2
Blame it on the WAGs, girlfriend and ex-girlfriend
Links:
Don't blame girlfriends for woes on soccer pitch (Ifpress.com)
1
Paul the Oracle
Mani the parakeet
randomly put together by sully86 at 9:24 AM
Email ThisBlogThis!Share to TwitterShare to FacebookShare to Pinterest
Labels: people, sports