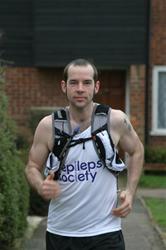 Sam Robson did what most people do after completing a marathon: He went home and fell asleep. Except rather than drive to his house,99 miles away from the finish line of the London Marathon, Robson ran back. All the way.
The 28-year-old from Central England finished Sunday's official race in 3 hours and 45 minutes before starting on the 99-mile second leg. He arrived to his home in St. Ives Cambs about 25 hours later, greeted by a cheering crowd. In total, he ran 125 miles in 29 hours, a pace of around 13 minutes per mile.
That number sounds insane, but it's even more mind-boggling if you really think about it. Think back to what you were doing five hours ago yesterday. Now imagine you've been running since then. I don't know if most people could stay awake that long, let alone do anything remotely physical.
Robson, a medical researcher, completed the super-marathon to raise money for the UK Epilepsy Society. In all, he raised a little more than $5,000 for the charity. Robson has suffered from the condition since he was a teenager.
He told reporters that the running itself was easy, but staying up, keeping hydrated and ingesting calories (to make up for the 15,000 he burned) was the hard part.
"I had to have regular breaks to refill my water and whenever I stopped my legs seized up so I couldn't rest for long. In terms of tiredness, my legs felt pretty good and the worst bit was I had to keep eating to replace all the calories I was burning.
One day after his mega-run, Robson said he was doing fine except for some soreness. That's to be expected. It wasn't just his first 99-mile run, it was his first marathon too.

randomly put together by sully86 at 12:53 PM
Email ThisBlogThis!Share to TwitterShare to FacebookShare to Pinterest