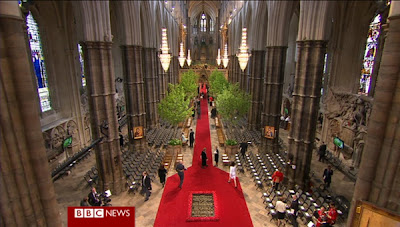 be updated from time to time
get updates on:http://twitter.com/#!/sulley86

Rain was expected to shower during the wedding, but it hold up(mother nature was good). When I watched it from the television, it was amazing to see the size of the crowd that gathered along the pathways that are going to be used by the royals and such. As cars after cars went pass the route to reach the church, there was almost a surreal excitement that came with that, as the wife to be of Prince William was ushered into the car with daddy helping as the tram that was that  part of her wedding dress was a slight nuisance.( We wouldn't want to destroy such delicate dress. The biggest roar of all was save for Kate as she make her way to Westminster Abby with her daddy.
I think the defining moment for me was when Kate got walk the aisle, as the voices from the choir echoed through the church of Westminster. Younger brother Harry, took a peek behind and reassures Williams with words of encouragement I guess. I thought that was sweet.
The carriage ride was awesome, but the balcony scene was important for me than the dress or the wedding ceremony at the church itself. They gave not only one, but two quick kisses to each other. I thought those smooches should be  longer.

randomly put together by sully86 at 4:39 PM
Email ThisBlogThis!Share to TwitterShare to FacebookShare to Pinterest
Labels: cool, events, people