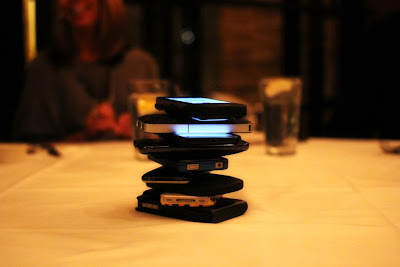 "Don't Be Anti-Social During Meals With Friends."

Everyone puts their phones in the middle of the table. Whoever cracks first by touching their phone, pays for the entire meal.

The purpose of the game was to get everyone off their phones, away from twitter, facebook, texting, etc and to encourage conversations. In other words, help cure the "Anti-Social Social Media Craziness."

1) The game starts after everyone sits down.

2) Everybody places their phone in the middle of the table.

3) The first person to touch their phone loses the game.

4) Loser of the game pays the bill for everyone's meal.

5) If the bill comes before anyone has touched their phone, everybody is declared a winner and pays for their own meal.

Are You Game? Are you willing to turn the tide of anti-social behavior? What do you think?!?
randomly put together by sully86 at 11:48 PM
Email ThisBlogThis!Share to TwitterShare to FacebookShare to Pinterest
Labels: game, people, social experiment

You've no idea how much I want to make that a rule!

au and target: i've tried it recently and no one was up for the challenge...